Chapter 13: Michael's Gambit is the 13th and finale episode of Season 1 of The Good Place.

Eleanor (Kristen Bell) and her friends contemplate their fates in the Good Place.

The episode opens in what looks like an office, perhaps of the 1950's era, an array of desks with workers, answering phones, using adding machines. A man, Dave, walks through the desks to one at which Michael is sitting, with a stack of files in front of him.

They say hello, and Dave says there are new files arriving, and the "big guy" thinks it's time for Michael to fly solo, he's been an apprentice long enough.

Dave leaves a stack of files, "Project No 12358W." (We have seen that number on a number of things in the neighborhood we've seen so far.) Dave says now Michael will be reporting directly to the front office. And Dave points to an empty region of the office space, where there's a single table, labeled "Architects Only".

We are back to the end of the previous episode: The Judge says The Bad Place is owed two people, and any two of them, Eleanor Shellstrop, Jason Mendoza, Chidi Anagonye, and Tahani Al-Jamil, can go. They have to decide.

Eleanor says she and Jason are the mistakes, they should go. Chidi and Tahani quickly agree. But Jason argues, every since he's been in The Good Place, he just tried to stay out of trouble, and Chidi actively did more that could be considered bad. Eleanor pulls him aside and says, look, Chidi and Tahani are better people, and after some reflection he agrees. Eleanor and Jason says goodbye to their friends.

Then Good Eleanor walks in, and says she's taking one of the slots to the Bad Place. (Chidi: "What?" Jason: "Awesome!") It's because everyone is supposed to have a soul mate, and actually, her soul mate (Chidi) doesn't love her, so this neighborhood could never be her Good Place. Chidi is speechless for once, and she leaves. So they only have to choose one more person. Which looks like Eleanor, since Jason has only reluctantly gone along.

The Judge and Michael are waiting, and the Judge expects that either way, Michael will be in hot water, and retirement is likely, this is Michael's mistake.

(Flashback: Michael is in the Architects section of the office space, drawing at the table, and another worker sees his design. Michael wonders if their process is wrong: they get the names, make a design, they arrive, we move on to the next design, we never get to see how it worked out. She says just try to do a good job. He crumples up his blueprint to start over, saying "a good job." He has a "bold new plan", as he puts on the blueprint.)

Fake Eleanor summarizes: she will go to the Bad Place, with Real Eleanor. Chidi now says, no, Fake Eleanor isn't going, he is, Real Eleanor is his soul mate, or was going to be, and if Real Eleanor goes because of him, he'll never be at peace. Then Tahani says, no, she's going instead of Real Eleanor, so Chidi and Fake Eleanor can stay, Tahani and Chidi can love each other too. There is a general argument, until Fake Eleanor says she has the solution, and summons Michael and Judge Shawn. She is surprisingly upbeat about it.

Fake Eleanor announces that she and Chidi will go to the Bad Place. Judge Shawn says no, the real mistakes were Fake Eleanor and Jason, but Eleanor says that he said they got to pick, and they're going. She's still strangely upbeat, and she explains: while they were all arguing a moment ago, she said to herself, "this is torture", and it hit her: This is the Bad Place. Michael smiles, and laughs. "I can't believe you figured it out."

Michael is now angry, he was "so close to pulling it off", but Eleanor ruined it, and Judge Shawn just looks worn and resigned too. Chidi and Tahani objects, no, this is paradise, but Eleanor says no, look at it, she's surrounded by people who are better than her, her being here forced Chidi into ethical torture, Tahani tortured Jason by trying to get him to talk, Jason tortured Eleanor because she might blow their cover, the four of them have been torturing each other since they arrived, and everything Michael did was to make at least one of the four miserable.

Now the door opens, and Real Eleanor walks in and starts to tell Chidi she loves him and that they should stay ... until Michael stops her, calls her "Vicky", and says "they figured it out." "Eleanor" groans, and complains that this was supposed to be her big moment, she practiced that speech for 3 hours, and she storms out. Judge Shawn remarks what he told Michael when Michael said he could keep this up for 1000 years....

(Flashback: Michael doing a presentation to a board, saying it's time to innovate, they can make an afterlife that's more fun for "us", though not for "them". He presents to them a board showing his proposed experiment, four people, perfectly suited to make each other miserable, so they will torture each other. Shawn, who seems to be sitting at the head of the board, objects that they tried this, humans don't torture each other well on command. But Michael says they'll do it as long as they don't know they're supposed to be doing it, and they'll do it for 1000 years. Shawn says he'll be lucky if it lasts 6 months.)

Michael explains, except for the four, everyone else in the neighborhood is one of "us". (As an example, there's a flashback to a scene earlier when Eleanor and Chidi were arguing, and secretly Michael was priming two other neighbors, who are happy to be thrown into the scene and rev up Eleanor and Chidi's argument a bit more.)

But the plan went awry when Eleanor confessed, after that, Michael and everyone else had to scramble. And he was surprised by Jason and Janet falling in love, Janet isn't one of "us", she's a mainframe for both Good and Bad. Eleanor wonders, why is Tahani here, didn't she do good, raising lots of money for good causes? Tahani's face falls, she realizes her motivations were corrupt, she raised money not for the causes, but to stick it to her family. And Chidi is here because he hurt everyone in his life from his rigidity and indecisiveness.

Michael gripes, all this planning was for nothing, but Eleanor pushes back, yes, they tortured each other, for a while, but they also took care of each other, and improved each other, so Michael's real result was making his four "victims" a team.

Michael realizes, yes, his big mistake was bringing them all together, next time he'll spread them out so it's a slower torture. The four realize, there's a next time? (This isn't the happy ending?) Michael says, yeah, he'll erase their memories, make a few changes, and start over again. He goes, to get the "boss man" to sign off on the restart.

Michael goes to Shawn, the "boss man", who isn't sure this is worth it, all of this work for four people, though Michael argues it's promising for a first try, it just needs some tinkering. Shawn lets him go, but warns him, he's out on a limb, it better not go sideways again.

While Michael is gone, Eleanor says they need a plan. Everyone is stupified. She notices one of Chidi's ethics books, opens it and writes something we can't see. She tears out the page, calls over Janet, and, after Janet affirms that she can't eat anything, stuffs the page into Janet's mouth. Then Michael comes in, and as Eleanor is doing some final taunting, he snaps his fingers.

Eleanor's eyes open. She's in Michael's waiting room, just like at the start of the Pilot. The story proceeds rather like the Pilot, with tiny changes. (For instance, where in the Pilot, the words in Michael's waiting room say "Welcome! Everything is fine!", this time they say "Welcome! Everything is great!") There are snippets of this reboot: Michael showing her the neighborhood, the first orientation meeting, getting her house.

Her assigned soul mate is a buff young man called Chris Baker, who was a mailman. They look like they would get on well together. But at the point where, in the Pilot, she asked Chidi if he would stand by her no matter what, Chris says he has to go exercise, so she never reveals that she's a fake.

Once he's gone, and Eleanor is alone, Janet pops into existence, and says "I think this is yours, after I was rebooted I found it in my mouth". It's a piece of paper, on which is written, "Eleanor - Find Chidi".

Tiya Sircar as The Real Eleanor 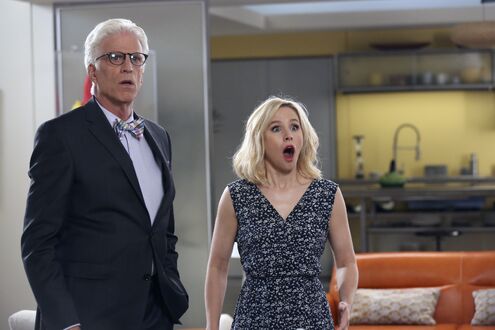 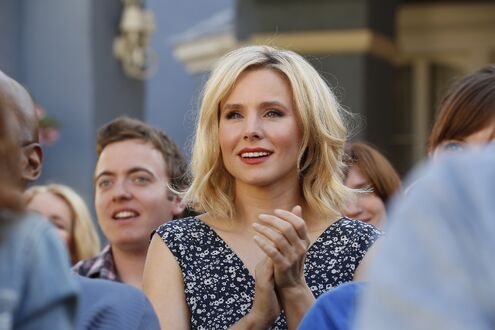 Add a photo to this gallery
Retrieved from "https://thegoodplace.fandom.com/wiki/Chapter_13:_Michael%27s_Gambit?oldid=7008"
Community content is available under CC-BY-SA unless otherwise noted.