The Good Place Wiki
Register
Don't have an account?
Sign In
Advertisement
in: Episodes, Season 4, The Bearimy Project: Completed

Steve Day
Chapter 45: A Chip Driver Mystery is the 6th episode of Season 4 of The Good Place.

Michael visits Bad Janet in Janet's void and tells her a story about how everything in the Afterlife experiment was going well, until Brent completed his racist and misogynistic novel, complete with characters based on people in The Good Place. Brent wants Simone to introduce his book at his book signing, and she ridicules it to Tahani. Chidi spirals out about the character based on him, which results in John finding out that Jason is not really Jianyu. Tahani eventually loses it, reading Brent the riot act and the experiment appears to be up in flames. The humans dust themselves off, however, and brainstorm new ideas to turn it around. This leads Michael to free Bad Janet and be better than he was yesterday.

Michael goes into Janet's void, where the Bad Janet who was sent to sabotage the experiment has been imprisoned. He tells her a recent story that happened in the neighborhood. Bad Janet only rolls her eyes at him and farts in his face, but Michael won't let that deter him.

Brent had written a novel titled A Chip Driver Mystery. It's badly written, full of cliches and characters that are clearly caricatures of the other humans. Brent believes that he's created a masterpiece, but everyone else disagrees, especially Simone. Eleanor and Michael are especially concerned as they're finally making some progress with Brent and don't want to do anything that could potentially set him back.

Meanwhile, Chidi and Jason dance and are discovered by John, who is shocked to find that "Jianyu" is not who he says he is. Despite wanting to gossip about this, John vows that he won't say anything to implicate Jason as not belonging in "the Good Place".

Brent tries to put on a book signing for his novel, demanding that everyone give him the compliments he believes he deserves. Tahani and Simone finally have enough and call Brent out on his attitude, with Tahani calling his book a racist and sexist mess. Brent throws a tantrum and calls Simone a "bench" and shoves Chidi, who punches him in response. The Soul Squad is disappointed that things got this bad, but refuse to give up and get back to work.

Bad Janet asks what the point of this story is, arguing that it only proves that humans are sinful. Michael retorts that even so, what matters is that humans continue to work to be a little better tomorrow than they were yesterday. He then hands her a copy of his and Good Janet's manifesto to read and sets her free, telling her that she has the choice to become more than her station in existence, especially since she's more advanced than her other sisters. Bad Janet looks on with a contemplative expression as she exits Janet's void with the manifesto in tow. 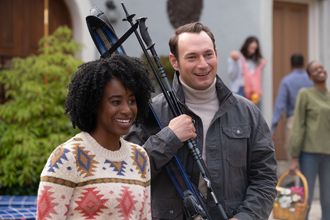 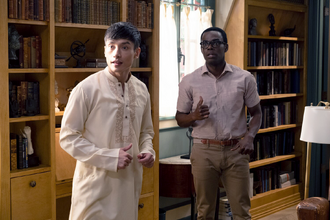 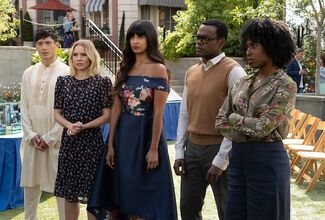