Various places on Earth including Senegal and France (before death)
Neighborhood 12358W (Season 1-2)
Sydney, Australia (for some time before death, and again in Season 3)

Professor of Ethics and Moral Philosophy at St. John's University
Professor at Sorbonne

Chapter 1: Everything is Fine

Chidi Anagonye is a principal character on The Good Place, portrayed by William Jackson Harper.

Chidi Anagonye is a kind and extremely intelligent individual. He is passionate about moral philosophy and ethics, constantly quoting famous philosophers and putting many of the scenarios he and others get into under a philosophical microscope.

Chidi is easily prone to becoming anxious and nervous when under pressure, leading to him getting numerous stomachaches. He loves teaching, and though Eleanor adds to his stress and annoyance, he genuinely enjoys teaching her how to be a good person.

Like Tahani, he enjoys the fine arts, such as reading poetry and impressionist paintings.

Chidi has a huge flaw, however, that being his crippling indecisiveness. He is practically incapable of making quick, snap decisions, needing to deliberate over and over again for even the smallest things.

His overwhelming knowledge of ethics often caused him to obsess over whether even his most insignificant actions were deemed ethical, such as telling his friend he liked his boots when in fact he hated them, even going as far as to admit to his friend months later after his surgery that he was lying.

Though he is well-meaning, Chidi's hesitance to make decisions ultimately lead to him torturing those around him and would eventually cahtorg

Despite this, with the help of Eleanor, Chidi begins to understand his issues and attempts to resolve them.

Chidi was born in Nigeria and raised in Senegal. He was a Professor of Moral Philosophy and worked in several countries, including periods teaching at the Sorbonne in Paris, France (where Tahani was a student, though presumably not in his course) and at St. John's University in Sydney, Australia.

Chidi is first introduced as Eleanor's soulmate. When he finds out that Eleanor is not supposed to be in the Good Place, he is immediately thrown into a moral dilemma on whether or not he should help her become a better person.

During this party, he acts as a caretaker of sorts, trying to keep Eleanor out of trouble. After the party, the two return to Eleanor's house. She asks him if anybody cared that she died, and that she thought more people cared that Chidi died.

Chidi then tries to teach her how to say his last name correctly, which Eleanor absolutely butchers, and she says "Ariana Grande" instead of "Anagonye."

The next day, Chidi goes outside and notices that Eleanor has caused the world to erupt in chaos. He then finds her and they head to Eleanor's house again, where he is asked, once again, to help her. They then go to Tahani's house for a neighborhood meeting.

After that, Michael announces that the residents of the neighborhood would fly. Then, Tahani steps onto the stage and offers to help clean up the debris in the neighborhood. Chidi, who is sitting next to Eleanor, hears her say that she would rather fly than clean up, and he volunteers both of them for the volunteer work, saying that it is a good way for her to practice being more selfless.

Later on, Eleanor causes a trash storm, causing Chidi to think that she is simply too selfish to help, telling her that she is now on her own. Later that night, Chidi catches Eleanor cleaning up the mess she made, and decides to help her because of this.

One day, Tahani comes over to their house and delivers a housewarming gift, a plant. Chidi tries to explain to Eleanor that she should treat Tahani with mutual respect. Then, Michael tries to introduce Chidi to a new hobby, since he essentially only did one thing during his life. These hobbies range from cartography to journalism, and Chidi says that he was not interested in any of these activities. He learns that Michael found his manuscript too convoluted to read, and is greatly disappointed until Eleanor reassures him.

He is later introduced to Jianyu, who he learns is actually a "drug-dealing DJ from Florida" named Jason, and almost loses his mind. The three of them go to a party to celebrate the opening of a new restaurant called "The Good Plates," and Eleanor and Chidi stress over how to hide the identity of Jason. Eleanor causes a sinkhole to open up.

Eleanor then gets obsessed with Chidi's lessons. She constantly nags him about their "school," and he reveals to her that she is a "full time job," and that he is constantly around her and needs time to do what he wants. Chidi is just about to move out of her house when Michael appears on the TV and announces that no one is permitted to go outside because of the sinkhole.

They both stay inside, remaining very aggravated at each other, but then Michael shows up with two other residents, Bart and Nina. In his time alive, Bart worked for a company investigating identity theft, and when Nina was alive, she was a marriage counselor.

Chidi and Eleanor don't want to be caught, but then Bart says that Chidi is hiding something. Chidi, although he absolutely despises lying, lies and says that having Eleanor as a soulmate is dissatisfying because he never had a serious relationship on earth.' Later, when Michael says that it is safe to go outside, Eleanor meets him by the lake and gives him some alone time.

Then, Tahani tells Jason that they should go to a spa together. Jason immediately consults Chidi, because he must hide his identity in order to stay in the Good Place. Chidi offers to go with the couple, and he helps Jason by stopping him when he is about to say something that could give him away. Tahani leaves, feeling that Jason doesn't love her. Chidi comforts her.

Michael then announces to the neighborhood that he is the problem and that he must leave them all. When Eleanor finds that Michael would be retired, she was relieved, but Chidi tries to convince her that this is actually a bad thing because she is not being honest. Eleanor then learns what retirement is, and immediately tries to put a stop to it.

Being part of this team, he goes with her to murder Janet, since she is the only one who can operate the train that leads outside this neighborhood. They both try to murder Janet, but her begging for her life is so realistic that they can't bear to do it. Then, Jason arrives and goes to the button to press it, but Chidi, unlike Jason, knows that pressing that button would lead to Janet's demise, so he shoves him out of the way, and accidentally murders Janet in the process. Afterward, he is tortured by guilt at what he had done, and Eleanor confesses for him that she is the problem in this neighborhood.

Later, Eleanor is about to be sent to the Bad Place for being a bad person. When the Bad Place train is about to pull out of the station, Chidi immediately goes to Michael to confess to the murder of Janet. They stop the train, taking Eleanor off. But then, they find that there is another Eleanor Shellstrop, the good one. Real Eleanor comes to the neighborhood along with a lot of demons. Michael tries to negotiate with the demons so that he can keep Eleanor. Meanwhile, Real Eleanor and Chidi form a bond, making Eleanor jealous.

Michael and Chidi try to study ethics together to come up with an argument to keep Eleanor. But then, Eleanor confesses that she has fallen in love with him. When she is about to leave the room, Tahani bursts in and says that she loves him as well. Michael then tries to help him choose between Eleanor, Real Eleanor, and Tahani. Chidi then confronts the three women at Jason and Janet's wedding.

Eleanor then tries to earn enough good points to stay in the Good Place. But, nothing is working. Real Eleanor tells Chidi that she loves him, and he doesn't tell her that he loves her back because he is worried that his motivation is corrupt. He then realizes how Eleanor planned to get the points; by doing nice actions, then leaving. This is because she was only doing this to stay in the neighborhood, but she got the points, meaning that she is leaving.

After Eleanor, Jason, and Janet escape to the Medium Place, Chidi, Tahani, Real Eleanor, and Michael plead Eleanor's case to Shawn, the all-knowing judge of the universe. Shawn then says that out of the four, meaning Jason, Tahani, Eleanor, and Chidi, he needs Jason and Eleanor to go to the Bad Place within the deadline he has set, or else Tahani and Chidi would go in their place. When Eleanor and Jason finally arrive, they miss the cutoff. Shawn then becomes annoyed and says that he doesn't care which two go to the Bad Place anymore.

Eleanor figures out that this is actually the Bad Place, and that the four of them were actually torturing each other. Chidi learns that he went to the Bad Place, not because he continued to use almond milk after reading that growing almonds was bad for the environment, but because he tortured everyone in his life with his indecisiveness and his rigidity.

Chidi, along with Eleanor, Jason, and Tahani, are re-booted and have no memory of what happened in season 1. Eleanor confronts Chidi with the "find Chidi" note, and immediately realizes that they're not in the good place. Michael reboots them over 800 times, and eventually gives up and becomes their friend. Eleanor and Chidi go to Mindy St. Claire's, where Eleanor finds out that in a previous version of the neighborhood, Chidi and her were in love.

Eleanor hides the tape, but Chidi is suspicious of her strange behavior. Eventually, Eleanor shows Chidi the tape, and he says he has no feelings for her beyond friendship. Eleanor ignores it, but in ep.9 when they are both clearly drunk, Eleanor confesses to Chidi that she has strong feelings for him. In response, Chidi says his brain is like "a fork in a garbage disposal."

When Tahani, Jason, Eleanor, and Chidi go to the bad place, Chidi is mistaken for a master torturer named Trent. Finally, he and the gang get to the portal and get tested by the all-knowing judge. Chidi's test is to choose between two hats, and unfortunately fails, due to taking 82 minutes to choose one. In the season 2 finale, Janet confesses to Jason that she loves him, saying, "my excuse was I needed time to evaluate my feelings and the situation was complicated, but that was just irrationalization."

While hearing this, Chidi looks at Eleanor, and mutters, "or that my brain is like a fork in a garbage disposal." Right after Janet's confession, Chidi walks up and kisses Eleanor, now both realizing that the other loved them just as much as they loved the other. After, the judge and Michael bring Chidi back to life, and he meets Eleanor, though neither of them remember the other.

❝ Principles aren't principles when you pick and choose when you're gonna follow them! ❞
—Chidi to Eleanor

"I have a stomachache."

- Chidi whenever he is distressed and anxious. 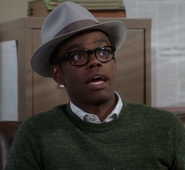 Retrieved from "https://thegoodplace.fandom.com/wiki/Chidi_Anagonye?oldid=7082"
Community content is available under CC-BY-SA unless otherwise noted.