Edit
watch 02:56
Doctor Strange in The Multiverse o Madness - The Loop
Do you like this video?
Play Sound

D'Arcy Carden is an actress and producer, known for her work as a member of the improv comedy troupe Upright Citizens' Brigade. She plays the role of Janet in The Good Place.

Carden began her career performing improvisational comedy at the Upright Citizens Brigade Theatre. She went on to make appearances in several television series. 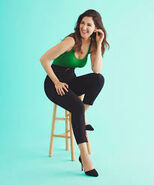