Jameela Jamil is an English television and radio presenter, activist, and model.[1] The Good Place was her first professional acting role. She received the role when she moved to Los Angeles, California after a breast cancer scare that inspired her to quit her job at the BBC, leave her boyfriend, and leave the UK. She plays Tahani Al-Jamil on The Good Place.

Jameela Jamil is a British actress, radio presenter, model, writer and activist. She is also known for her activism work, particularly in advocating for body positivity. 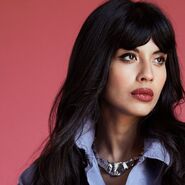