The Jeremy Bearimy Timeline is the way that time in the afterlife flows relative to time on Earth, as explained by Michael in the episode of the third season named "Jeremy Bearimy". He explains that whilst time on Earth moves as if it was a straight line, time in the afterlife moves in a very curvy and non-linear fashion which, when drawn on a whiteboard, resembles the cursive English word 'Jeremy Bearimy'. The cursive line he draws goes back around and connects to its own beginning, meaning that that there is no clear past nor future (much to the consternation of Chidi, who cannot wrap his head around how consequences of events can precede their cause). The dot over the 'i' in Jeremy Bearimy is an isolated point on the timeline which contains Tuesdays, July, and "occasionally...the time moment where nothing never occurs." Janet also explains that her birthday is somewhere near the front of the 'a' on 'Bearimy'. 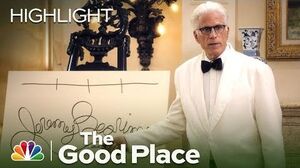 It is unclear how time affects Immortal Beings. It is assumed that, when referencing time with regard to human affairs, Immortal Beings use Earth time, as Gen does when she states that she hadn't had a case in 30 years (presumably referencing Mindy St. Claire), and as Neil does when he states that no human has earned enough points to enter The Good Place in 521 years. This would make the last time a person entered The Good Place in 1497 if Janet(s) took place in 2018 like the Season 3 episodes set on Earth before it.

Because the nature of the Bearimy timeline is that of a loop, it is unclear how this loop operates with regard to Earth time. Perhaps Marisol's birthday was being celebrated with regard to Earth time in the Afterlife. It is possible that the loop operates in specific moments in a nonlinear manner, and therefore certain time moments from Earth would repeat randomly within the Afterlife (i.e., Marisol could be turning two million the next day, and then 900 billion the day after, and then 39 million again).

It is clear that humans are aware of and use the Jeremy Bearimy timeline in the afterlife as indicated by the Jeremy Bearimy calender that Eleanor uses in the final episode, however, it is still unclear how humans arrive in the Afterlife if time is in flux; because the Museum of Human Misery shows examples of humans' bad behavior only prior to 2018 (the year in which Chapter 24 first aired), it may be assumed that time moves forward with regard to the Earth timeline (or at least moves generally in the same direction as Earth's time).

Of course, it is entirely possible that time moves entirely separately within the Afterlife from Earth, in which case there would be no frame of reference. That could explain why Immortal Beings refer to time using Earth's timeline, and that humans arrived in the Afterlife by Earth's time–in Michael's neighborhood during the first rot, all of the "residents" seemed to be from modern time, although this could be part of the ruse.

The best example of time in the afterlife with regard to humans is that of Mindy St. Claire, as she lived outside of the neighborhood and therefore was not rebooted during Chapters 13, 14, 15, or 16 (the chapters in which the humans were rebooted). She stated in Chapter 12 that she'd been in The Medium Place for 30 years, and it was made clear in Chapter 16 that she'd experienced the 300 years of reboots. It is unclear whether the Jeremy Bearimy timeline was operating linearly to Earth during the first 30 years of Mindy's time in the Afterlife, or if she experienced 30 years of nonlinear time.