Before being cast as Jason, Jacinto was mainly a dramatic actor, with his most prominent role being that of a crime boss in The Romeo Section. He has played small parts in shows such as Supernatural, iZombie and The 100. Jacinto has a degree in Civil Engineering from the University of British Columbia.

Jacinto was born in the Philippines, raised in Canada, and currently lives in Los Angeles. 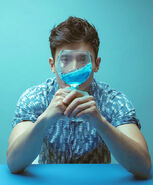 Retrieved from "https://thegoodplace.fandom.com/wiki/Manny_Jacinto?oldid=6235"
Community content is available under CC-BY-SA unless otherwise noted.