watch 01:47
Wiki Targeted (Entertainment)
Do you like this video?
Play Sound 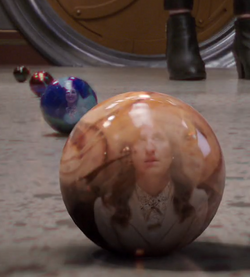 Marbleization is a process Janets can undergo in case of repeated glitching, rendering Janet powerless. The Janet in question will transform into a marble which can be easily disposed of or eaten as a mid-day snack. All Janets possess a hole on the side of their head which will activate marble transformation when a paper clip is inserted into it.

Marbleization is usually performed only for safety reasons.

"In the event of continued malfunction, hold down Janet's nose, and insert paperclip into small hole behind left ear. Janet will rapidly collapse in on herself. When Janet is roughly the size of a marble, she can be launched into space through an inter-dimensional suction tube or eaten as a midday snack. A new Janet will need to be procured in order to return the neighborhood to functionality."[1]

While marbleization is reversible, it is the closest that a Janet can come to complete destruction. It is a more permanent measure of Janet glitch prevention, as opposed to rebooting.

Marbleization is a default feature of Janet. It is built in and the procedure is clearly scripted in Janet's manual. Michael's Janet first introduces the concept in Chapter 20 when her emotions start causing glitches in the neighborhood. Michael refuses her request for marbleization due to his connection with her, despite her problems.[2]

During the main cast's visit to the Bad Place, Michael marbleizes a Bad Janet.[3]

In Season 3, Janet begins to malfunction while giving Couple's Therapy to Tahani and Jason due to vague feelings for Jason lingering from her numerous reboots. When the glitches are later confirmed to be due to unintentional lies, Janet purposes marbleizing her and launching herself into space to save the neighborhood. However, Michael is unable to do so. While infiltrating Accounting, Eleanor's loss of identity nearly caused Janet to collapse in on herself; she recommends Michael marbleize her and then bring her back some place else, but Eleanor is able to regain her sense of self just before he is about to marbleize her.

In late Season 4, having read Michael's manifesto, Bad Janet arrives with an army of Janets, including the scrapped Disco Janet, at the Judge's Chambers to stall the reboot of Earth. They are then marbleized one-by-one by Judge Gen as she searches each of the Janet Voids for the Human Eraser Thingy. Whether they remain or not is unknown.

Marbles take on the color hue of the Janets they originated from, similar to the Memory Orbs of Disney Pixar's Inside Out. Good Janets are usually blue, purple, or green (depending on their outfit); Bad Janets are deep red; Neutral Janets are beige. The marbles also have a vague reflection of their corresponding Janet at the moment of their marbleization. Slight variations of this basic model may occur with unique Janets.

Retrieved from "https://thegoodplace.fandom.com/wiki/Marbleization?oldid=12298"
Community content is available under CC-BY-SA unless otherwise noted.