TBA
Part 6: The Solution is the sixth and final episode of The Selection.

When Shawn (Marc Evan Jackson) takes aim on a more personal attack on the humans, Glenn (Josh Siegal) has some reservations. 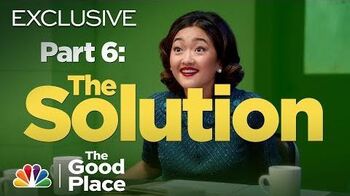 The Selection, Part 6 The Solution - The Good Place (Digital Exclusive)
Retrieved from "https://thegoodplace.fandom.com/wiki/Part_6:_The_Solution?oldid=7218"
Community content is available under CC-BY-SA unless otherwise noted.