Chapter 1: Everything is Fine

Chapter 52: Whenever You're Ready

❝ I haven’t been this upset since my good friend Taylor was rudely upstaged by my other friend Kanye, who was defending my best friend, Beyoncé. ❞
—Tahani[2]

Tahani Al-Jamil is a principal character in The Good Place, played by Jameela Jamil.

Tahani is Pakistani-English. She was born in Pakistan, raised in high society England, and consequently was very well educated. In both her life and afterlife she is regarded as highly intelligent, a brilliant conversationalist, and a wonderful hostess. She is exceptionally attractive and very fashionable. As she explains when initially introducing herself, the name Tahani means "congratulations" and Al-Jamil means "beautiful" - so her full name actually means "Congratulations Beautiful!"

One of her most impressive achievements was raising sixty billion dollars for a non-profit organization. She claims to have attended an English finishing school, the Hertfordshire School for Expressionless Girls, before studying at Oxford University and the Sorbonne in Paris, France.

In The Good Place, she is seen as an overly good person, which makes Eleanor Shellstrop insecure. She frequently name-drops celebrities, implying each one has a personal connection to her.

Throughout Tahani's life she did many good things; but the anguish of being overlooked by her parents, and overshadowed by her younger sister Kamilah, fomented a lifelong bitter jealousy.

Although her actions were mostly good, her motivations were corrupt, which resulted in her being sent to the Bad Place. For being a sophisticated socialite, her death was quite unexpected.

When her sister Kamilah was being inducted into the Rock & Roll Hall of Fame in 2016, Tahani sneaked into the party as a server. After confronting her sister and being told that she was not thought about often, she toppled a statue of her sister, causing it to tip over and fall on her.

In the Season 2 finale, Michael goes back in time and pushes Tahani out of the way of the falling Kamilah statue. The near-death experience causes her to change her perception of life. After serving a monk for about a year, she wrote a self-help/autobiographical book titled Get out of the Spotlight.

After the dramatic success of her book, Tahani moved to Sydney, Australia to join a social study led by Chidi Anagonye and Simone Garnett at St. John's University.

There, she meets Eleanor Shellstrop and Jason Mendoza, the other participants of the experiment.

After Michael reveals the group's experiences in the afterlife, Janet is forced to take Tahani, Eleanor, Chidi, and Jason into her void, effectively ending their lives on Earth once more.

Tahani appears in Michael's neighborhood. Her soulmate is Jianyu, and she lives next to Eleanor, whose soulmate is Chidi. On her first day in the neighborhood, she hosts a party to welcome everyone to The Good Place. The following day, when Eleanor causes disaster, she offers to help clean up the neighborhood.

One day, she brings Eleanor a plant. It is no ordinary plant, either; whenever her relationship with Eleanor decreases, the health of the plant will deteriorate.

Later, Eleanor criticizes Tahani and steals her diary, making the plant's health decrease. But one day, Tahani is crying on a couch and is comforted by Eleanor. The plant then grows healthy again.

Tahani makes frequent claims about her friendships with famous individuals that seem extremely unlikely; but at least one of these claims, regarding a connection to Anderson Cooper, is corroborated by a truth-detection device. She over time learns about how to be a good person.

In season 2 the four humans have their memory of The Good Place. Tahani is rebooted several times along with the other 3 humans and lives through 802 different versions of the afterlife. In each of them she meets the other 3 and tries to become a better person. She teams up with Michael, Janet, Eleanor, Chidi and Jason to fool Vicky when she blackmails Michael into telling Shawn about his many reboots.

She forms a romantic relationship with Jason after she gets tortured by Vicky and other demons who refuse to attend her fabulous party. Jason tells her to stop being so hard on herself and that she's a brilliant woman. However, she is ashamed of that relationship and so, go for couple's therapy to Janet. Janet, who is still in love with Jason, starts glitching as she tries to help Tahani and Jason progress in their relationship. To avoid this, Michael sends Tahani and Jason away and they bond by Tahani letting go of her uptight mannerisms and just having fun. They decide to get married and ask Janet to officiate the wedding which is dramatically stopped by Eleanor, Michael, Chidi, and Derek. They are told of Janet and Jason's history.

After their experiment is declared a success by Shawn, she is roasted by Michael, who is pretending to be against them, at the end of the experiment by hurting her through her insecurities about her sister. After she escapes the demons along with the rest of Team Cockroach to be reunited with Michael, she sits and has a heart to heart with Jason. They break up as she believes that she has to stop looking for her worth in other people. They end on amicable terms.

She goes along with everyone else to appeal to the judge through the Bad Place. With Michael, she tries to help Janet to act like Bad Janet, to no success. When she comes across her mannequin in the Bad Place, she comments on Elon Musk's underwater Mansion and ends up saying exactly what the Bad Place is using to make her look bad.

After they get chased by demons, Tahani reached the judge's chambers to plead their case. While the judge refutes them, Tahani is able to convince her to listen to them as the Judge is enamored by Tahani's accent. The Judge issues challenges to all of them to prove that they belong in The Good Place as they have genuinely changed during their time in the Fake Good Place. Tahani's challenge is to walk through a hallway to the end through a red door. The hallway contains rooms with people Tahani knew in her life, all saying what they really thought about her. She resists most of it but gives up on the last door where she sees her parent's name. She enters and is still mocked and put down by her parents. She realizes that no matter what she does they are never going to change and so, she leaves finally having let go of her need for their approval. However, this meant that she failed her test and hence did not earn her rightful place in the Good Place.

After Michael miraculously appears and talks to the Judge, Tahani and Eleanor have a heart to heart about the changes that they have gone through. Tahani confesses that any progress she has made is due to the love and friendship of Eleanor. She is rebooted back to Earth and Michael saves her life by pushing her out fro underneath Kamilah's statue.

In the final episode, after reconnecting with her parents and sister, Tahani decides that she has exhausted all her possible activities and achievements in the Good Place and decides to walk through the arch and end her journey. Chidi, Eleanor, Janet and Michael celebrate her last party with her, organised completely by herself. However, Tahani realises that there is more to do in the afterlife and decides to become a Good Place architect.

Following her internship under Glenn and Beadie, Tahani is a soon-to-be-certified architect who promises to design Mindy St Claire's test under the new afterlife system. It is assumed that she is an architect and has not walked through the arch to end her existence yet. 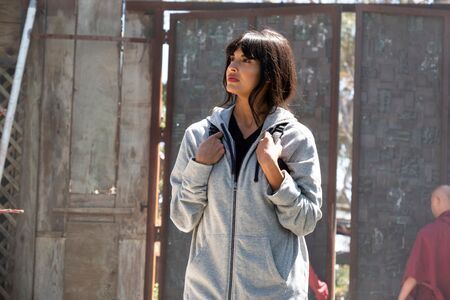 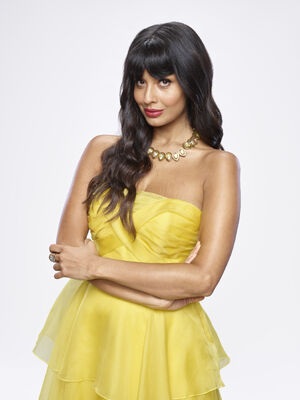 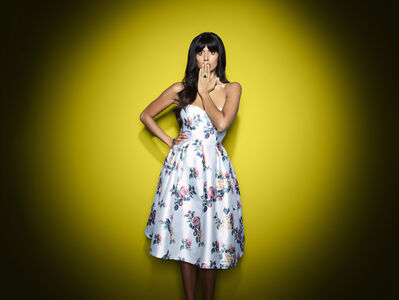 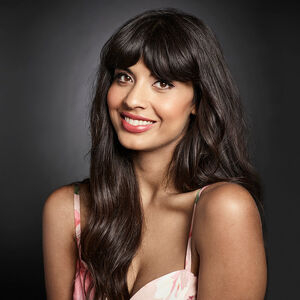 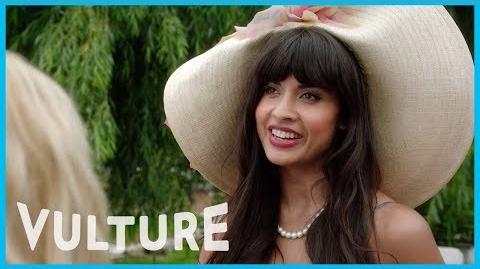 Every Celebrity Tahani Has Name-Dropped on The Good Place

Retrieved from "https://thegoodplace.fandom.com/wiki/Tahani_Al-Jamil?oldid=9371"
Community content is available under CC-BY-SA unless otherwise noted.