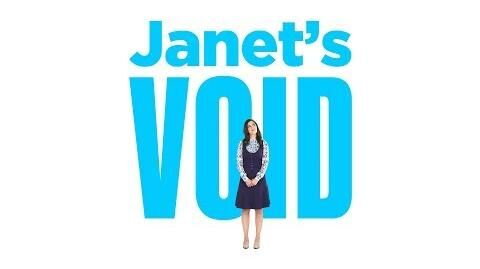 Sub-Dimension Outside of Space and Time, at the Nexus of Consciousness and Matter

Makers of Light, Darkness, and Everything

Janet's Void is a boundless nothing where Janet resides. Its appearance varies with different off-branches of Janet.

Each Janet has a Void that corresponds with that particular Janet. However, they are accessible by other Janet-types when the need arises (i.e. Bad Janet taking the Humanity Eraser Thingy from Janet's Void when the Judge was searching her Void for it).

This first Void seen in The Good Place is that of a Good Janet. It is completely white and empty, though items can be conjured within it.[1][2] It assumable contains a computerized catalog somewhere like the other Voids.

The Void of Bad Janets is first seen in Chapter 49. It is loud and noisy and full of junk. Allusions to bad things are prominent, such as Pirates of the Caribbean 12. Asking for the music to stop causes it to grow louder; asking it to get louder causes it to stop.

Bad Voids also have a computerized catalog, but the computer is spammed with error messages and notifications, making it nearly impossible to use.

Neutral Janets' voids are blank and empty, similar to Good Janets' but with a beige tint and consist of nothing but a computer. The computer is quite aged and has very neutral colors.

There is presumably only one Disco Void, as there has only been one Disco Janet present in The Good Place; however, it is unknown whether the Disco Void is still accessible or not after Disco Janet's marbleization.

The Disco Void is one infinite dance floor, complete with music on a loop and a disco ball hanging overhead. Instead of a search bar, one must make a request via a microphone connected to an eight-track stereo recorder. The void also has 70's style decor at the search station.

There is presumably only one Disco Janet Void remaining, as Disco Janet is a scrapped version of Janet from long ago. Whether or not Disco Janet was un-marbleized is unknown.

The Void is a place, or more accurately a non-place, where Janet resides. It is described by her as a 'boundless, barren nothingness'. When she created Derek, it is where both of them lived together until Derek moved out.

For a time, Derek was stored in a "corner" of Janet's void within a crate, after being put in "power saver mode". This implies Janet can easily traverse huge distances within her void at will, though it still takes some time to find him. However, we can hear Janet as she searches for him, implying that space in The Void operates differently than it does in the rest of the Afterlife, just as time operates differently in the Afterlife than on Earth.

In Chapter 35 "Don't Let The Good Life Pass You By," Janet, while making contact with a portal to Neutral Zone (and therefore being able to use her powers) transports the four humans and Michael into her void, effectively killing the humans on Earth.

In Chapter 36, "Janet(s)", Janet brings the humans with her into her void. Their physical essences deteriorating, the humans take on the form of Janets, so Janet gives them their own signature clothes (which Gen also gave them when they visited the Neutral Zone in The Burrito) to help distinguish them. Janet created a living-room-esque location for the humans within her void to reside so that they would feel more comfortable, but Chidi swapped it out for a classroom so that he could teach Eleanor, Jason and Tahani about the concept of "self". When Eleanor loses her sense of self after realizing she's acting vulnerably, she begins to destabilize the Void until Chidi reminds her who she is, returning the humans to their forms and causing Janet to throw them up.

The Void seems to be the essence of Michael's Janet, as there are multiple side effects that Janet experiences when she brings the humans into her Void. When Eleanor conjures a puppy, Janet finds herself burping an auto-tuned song. When Jason conjures a hot tub and a version of Pillboi (who is aware of his own conjuring, as he says, "I was just chilling being nothing, and then I was!" and when Janet discorporated him, "Oh, dip! I'm not again!"), Janet states that "my molecular essence is fragmenting and it's giving me the worst headache."

When Eleanor loses her sense of self, Janet's molecular essence does destabilize, as she is shown to have glowing white lines tearing her apart, a mirror of what is seen in the void (chunks of its existence disincorporating). When Eleanor retains her sense of self, the four humans regain their physical forms. However, Janet cannot withstand their presence in the Void, so she throws them up and they appear in the Accounting Department alongside Neil, Janet and Michael.

According to Michael, each Janet's Void has a backdoor into the Janet Warehouse, presumably in the location that Janet existed prior to being removed from the Warehouse. Michael also claims that the Janet Warehouse is "beneath the shapeless time-void", although it's unclear whether he is referring to the Warehouse or the IHOP. There is a portal to the Neutral Zone inside the Void.

Janets and demons can both survive in Janet voids, but if humans who are still alive are taken into the void their bodies will de-materialize on earth. if this happens (like it did to Eleanor, Chidi, Tahani and Jason) they will be in a small minority of humans who have never gone to The Good Place or The Bad Place upon their earthly deaths, and will therefore become, as Michael puts it, "inter-dimensional fugitives"